Ayanna Dozier on a tour poster that sparked sexist backlash

During early press for The Velvet Rope, Janet emphasized that a tour would follow the album, leaving the public to anticipate a cornucopia of images and media text that would extend the listener’s experience with the album. While the press were on alert for the tour dates and the promotional images to follow, nothing could have prepared them for the official poster to announce the Spring 1998 tour. The image was shot by her then husband, René Elizondo Jr. for the promotion of the album; images from these sessions would be fully released as part of The Velvet Rope TourBook.

The image in question, features Janet standing with one of her hips curved towards the viewer wearing a black high cut bikini bottom, a black push up bra, with a sheer long sleeve, low cut, single button cardigan, and, of course a nipple ring pierced through the exterior of the fabric to reveal its presence to the viewer. Janet has her trademark velvet rope curls, albeit in a more reddish brown tone than the fire red that was seen in her videos at the time, like “I Get Lonely” and “ Go Deep.” While the press were aghast at the image they had, in fact, seen it before as Janet used the same image for her Vibe magazine cover back in September of 1997. I supposed the swift backlash came from the wide-scale (both in geographic and size) distribution of a tour poster than a magazine cover as The Velvet Rope Tour poster was used for billboards across the world. Many press publications refused to run it and after a few traffic accidents in London, the billboard was taken down. Janet commented on the controversy with extreme irritation in her MTV The Velvet Rope Tour behind the scenes special. She remarked that the censorship participated in a form of gender bias against women who openly expressed and portrayed their sexuality to a larger public. 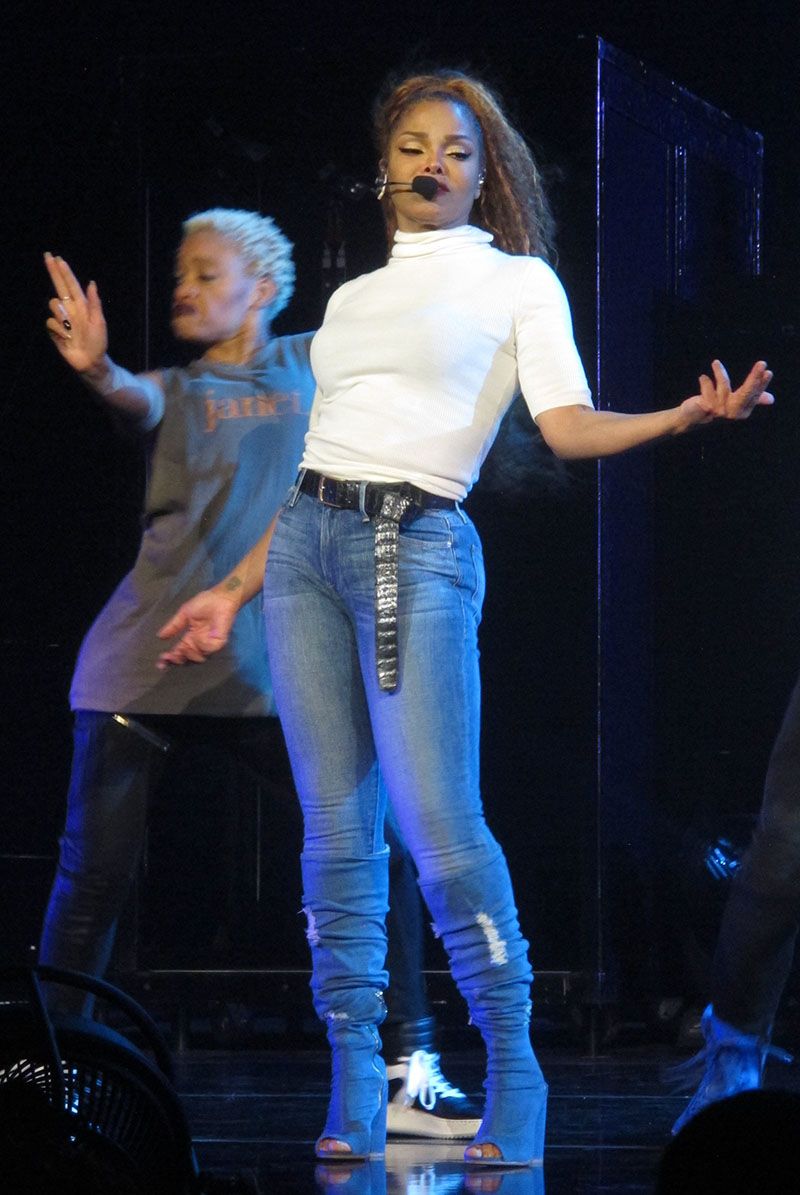 The censorship of the image, I similarly argue, was not because of the “racy” content but rather the terms in which they were being presented and the body making those terms. In the same year that The Velvet Rope Tour poster was unveiled, Carl’s Jr. had several commercials that turned women eating hamburgers, in various stages of undress, into an analogy for fellatio. And while adverts like this (of which there are many Carl’s Jr related or not) outraged, they were rarely censored. Society is comfortable the promotion of women’s bodies sexually outside of the grounds of their autonomy, when that autonomy is front and centered, the backlash emerges and what was “sexy” is now labeled as “selling themselves.” To be sure, Janet was selling herself, literally. She was using her body to sell her album, to sell her tour about herself.

The condemnation to the image reveals a larger issue in society around women who “sell themselves” in various entertainment industries, from musicians to sex workers. When a woman’s body is sold on behalf of something else it operates under the exchange of women as property. When a woman sells ‘herself’ it ruptures that dynamic and challenges the tenets of a sexual economy by which women can, in turn, profit off a system that atomizes their bodies for profit. To gain the system itself is considered taboo for it reveals the various codes, rules, and ‘conduct’, by which the economy of sex is constructed by and for heteropatriarchal norms. As a comparison, Madonna endured a similar backlash to the provocative visuals that accompanied her sexual-depressive album, Erotica (1992).

Flexi production manager download. SAi provides RIP software for printing and sign making programs for all production environment. We have a solution for all your design and printing needs. Software flexi 10 free download. Most people looking for Software flexi 10 free downloaded: FlexiSTARTER. 3.8 on 52 votes. FlexiStarter™ is the complete text and graphics layout program that can run on the Windows platform. 3.4 on 1639 votes. Flexi One Solution For All Your Print, Cut and Design Needs. SAi Flexi is the only all-in-one design, print and cut software for sign and print providers. With nearly 3 out of 4 shops using it, Flexi is the industry-standard for sign-specific design tools, RIP software, print-and-cut software, and direct vinyl cutting. See What's New in Flexi 19! Connecting to Production Manager. If you open either the Cut/Plot or RIP and Print dialog box, and Production Manager is already running on your computer, the design software will automatically connect to the Production Manager on your computer. If Production Manager is not already running on your computer when you open the Cut/plot or RIP and Print dialog box, the following dialog box will.

Janet’s highly eroticized imagery for The Velvet Rope, including the tour that featured her strapping a fan down to a chair for a lap dance aggressively challenged dominant image productions of women’s sexuality as created for men alone. Here, Janet begin to model sexual agency as an autonomous act rather than one produced under the presumption of the male gaze alone. This archive of accompanying album visuals and performances would inspire other women artists to embrace sexual agency from a point of autonomy rather than visual pleasure for others in their work. I would even argue that Janet’s imagery for The Velvet Rope became the template for artists like Rihanna and F.K.A. Twigs to embrace in their work. Although the tour image was repressed, it lives on. Its presentation of an assertive Janet confronting our respective gazes is a powerful document to the ongoing archive of women’s sexual agency produced outside of the matrix of solely male desire. Images like this and the response to them remind us of perceived danger of shifting our awareness of women’s sexuality as something practiced for men into something practiced for ourselves. While the common rhetoric would argue that we are long past this antiquated idea, I argue that the current socio-political debates around women’s sexual autonomy prove how desperate we are for more cultural documents that model sexuality outside of male desire alone.

Janet Jackson paved the way for other women artists to embrace their sexual agency. Buy your copy of Janet Jackson’s The Velvet Rope to learn more!