Nov 13, 2010 Were you looking for the Keystone in Arathi Highlands? Keystones are important racial archaeology related items that are occasionally looted with Archaeology fragments at dig sites. They each represent roughly the equivalent of 15 fragments when used.citation needed 1 How to use them 2 Types of keystones 2.1 In Outland 2.2 In Northrend 2.3 In Cataclysm zones 2.4 In Pandaria 2.5 In Draenor 2.6. RareScanner is an addon for World of Warcraft that detects whether a vignette has appeared in the minimap. A vignette is the little icon added in the 5.4 patch that appeared as a skull for a rare, or with other icons for events and treasures in your minimap. Since 7.0 patch it has appeared as a star.

There’s been a lot of grief over Archaeology rares lately, either for collectors like myself or people who actually want an epic for raiding. Everyone assumes that rare artifacts are, in actuality, rare “drops” in your project window, but I’m here to tell you that they may not be as rare as you think, but only in certain circumstances. How? It has to do with how the game tosses the dice to see what your next project is.

Chris Lord-Alge on CLA Vocals: “The most important part of any song is the vocals. The CLA Vocals plugin makes this part of mixing an absolute joy. I have taken the very best settings which I use in my everyday mixes and crafted them into this chain. It works great on all styles of singers and, best of all, they will want that sound every time!

Download free Cla VST,VSTi,AU,RTAS music software plugins & Instruments. Intuitive, minimal parameter controls make Vocal Doubler the easiest way to breathe life into your vocal recordings. Drag up and down for stereo separation, or left and right for. Chris Lord-Alge on CLA Vocals: 'The most important part of any song is the vocals. The CLA Vocals plugin makes this part of mixing an absolute joy. I have taken the very best settings which I use in my everyday mixes and crafted them into this chain. It works great on all styles of singers and, best of all, they will want that sound every time!'

Basically, it rolls a number and checks it against the total list of all possible artifacts. Rares are, obviously, harder to hit and it’s possible that the epic rares have the lowest drop rate of all (as compared to, say, the kaldorei wind chimes). If the game lands on an item the player is not eligible for, it rerolls. This is the important part. There are only three main reasons a player can be ineligible for an artifact: 1). Their skill is too low 2). It’s a rare the player has already completed 3). It’s a repeat of a common artifact when the player has yet to complete all available common artifacts. That third point is how you can effectively “cheat” the system.

I don’t know enough about probability or coding so I can’t outline the proof, but basically, you have a higher chance of getting a rare when it’s coupled with incomplete commons than its actual drop rate would suggest due to these free rerolls. In fact, the probability of getting the rare increases each time you complete another common until you’ve completed all the commons. This is why you usually get a rare early on in your archaeology career and why they suddenly get so much harder to find later on since you’ve usually finished all the commons before the really juicy rares show up.

I’ll use Zin’rokh as an example, since it’s the most infamous rare and because it makes for a perfect example of what I’m talking about. Let’s say it has a 1% chance to appear as a project. Zin’rohk can’t appear until you have a 450 skill in Archaeology, yet new troll commons stop appearing at around 250. Since most people start leveling Archaeology in the Eastern Kingdoms (since it has a better spread of all four starting races than Kalimdor’s 50% Night Elf spread) and Troll dig sites appear in Northrend, it’s a safe bet that a very high number of people have finished troll commons by the time they hit 450 skill. This is consistent with the numerous reports of people solving 300-500 projects before getting a Zin’rokh… or not even by then. Since the whole list is always available from the beginning the drop rate is a true 1% chance.

However, let’s look at the numbers assuming you haven’t solved a single troll common until 450 skill. There are 14 troll commons, so assuming the 1% chance on Zin’rokh, each common has a ~7% chance to drop (7/99 to be precise). So after you solve your first project, you have a 1/92 chance of getting Zin’rokh, since that first common or 7/99 chance has been made ineligible. That’s still only around a 1% chance, though. The next time it’s a 1/85 chance, again still pretty low. But that fraction keeps getting smaller and smaller. By the time you’re down to your last common and Zin’rokh the chance to land on the rare has increased to 1 in 8, or 12.5%! In fact, just by taking the probability of the whole system modeled here, you have a 42.75% chance of getting a Zin’rokh before finishing all of your commons.

Interestingly, this also means that races with fewer commons also make it harder to get the rares using this method. This is easily seen with the high-level races that have their epic rares available from the moment you can start finding their dig sites, yet have far fewer commons. For example, Vrykul only has 5 commons and the bearded axe rare. Assuming the axe only has a 1% drop rate as well, that’d mean the commons each have a 19.6% chance to appear. So with one common left, you still only have about a 5% chance to get the axe, with a 10.27% chance of getting the rare before running out of commons. So that’s why Tol’Vir stuff is so hard to find even though everyone automatically uses this superior method – they only have 8 commons for 6 rares. Even though it seems like with so many rares it should be easy to get at least one of them, you still only have a 22.3% chance of getting ONE of the six rares before running out of commons (assuming a 1% drop for each, which might not be the case) with only an 8.6% chance of getting a rare on the “last” solve.

This is by no means confirmed, but it’s the most logical and efficient way of modeling the system and seems to be supported by the data people are reporting. So, in short, if you’re after a particular rare in Night Elf, Dwarf, or Troll don’t solve any projects for them until you hit 450 skill. If you’ve already screwed yourself over, regrind Archaeology on an alt. Trust me, it’s a better time investment than trying to hit 1% on a project. If you’re after a Tol’Vir BOA weapon or other rare, good f-ing luck. This is also why, instead of asking for the ability to specify dig sites, you should be asking the devs to add more tol’vir commons.

This Archaeology guide will try to teach you the basics of this profession. You won't gain any real end-game benefits from Archaeology, most of the items you can get have no in-game power like pets, toys, and mounts. This profession is mostly for fun. You don't need to have it; it's optional.

However, most of the armors and weapons you can get are bind to account, which is really cool. Just imagine your alt hitting level 35, and you can equip [Warmaul of the Warmaul Chieftain] right away (keep in mind, these are not Heirlooms, these will not scale with your character level). It's a good idea to level up Archaeology with at least one character.

Once you train in Archaeology, you will be able to see dig sites on your World Map. They look like little shovels. There are always 4 dig sites per continent (only 3 for the Broken Isle), and it won't change on logout, server restart, or anything. You have to dig one out to get a new dig site.

These dig sites and the objects you dig out are player-specific, you don't have to worry about competition. Nobody can see your nodes besides you.

You will also get a new ability called [Survey]. You can only use this ability when you are inside of a dig site. The Survey tool will spawn and point in the approximate direction of a fragment, and there is a light that will indicate the distance you are from a fragment.

So how does this work in action?

When you discover your find, you'll get fragments specific to a particular race. There are 10 races, it depends on the zone, and your Archaeology skill which one you will find. Each dig site can be searched 6 times before it despawns and a new site spawns. (8 times at Draenor)

Here is a list of the races you’ll be learning about in Archaeology:

When you loot your first fragment, you will start a research project. The number of fragments required for each artifact can vary from 25 to 185. When you have enough fragments, you can click the little Solve button to complete that Artifact. If you have excess fragments, it won't go to waste. They will start a new project. Unfortunately, you cannot control which research projects you get, it's random, but it's based on your Archaeology skill level. 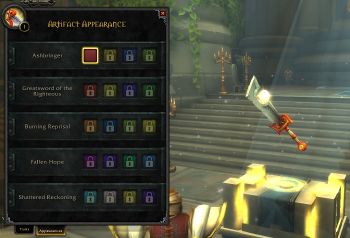 So, you might have to complete all of the research projects with a particular race until you get the one you wanted to in the first place. Not to mention, when you need Troll fragments for example, and you don't get any Troll dig sites for an hour, it can be annoying.

Sometimes you can get [Troll Tablet], [Highborne Scroll], [Dwarf Rune Stone], etc. when you loot a fragment at a dig site. You can use these to speed up your research a little bit. There is a slot that appears on some of the artifacts that you will be able to place one of these in, not every artifact but rare artifacts will often let you use two or three at once. The keystone will increase your fragment count by 12, or 20 for keystones from Pandarian dig sites.

You will get skill points for surveying dig sites, and 5 skill points for any artifact you solve (15 for rare ones), no matter which race it’s for. For example, you can level up to 600 in Eastern Kingdoms alone.

For the last 150 points between 800-950, you will only gain skill points in Zandalar or Kul Tiras zones.

If you have an epic flying mount and you level in zones where you can use flying, then it takes about 10 hours to level up Archaeology to 950.

You can learn every rank of Archeology up to 700 from Belloc Brightblade in Orgrimmar or from Harrison Jones Stormwind. 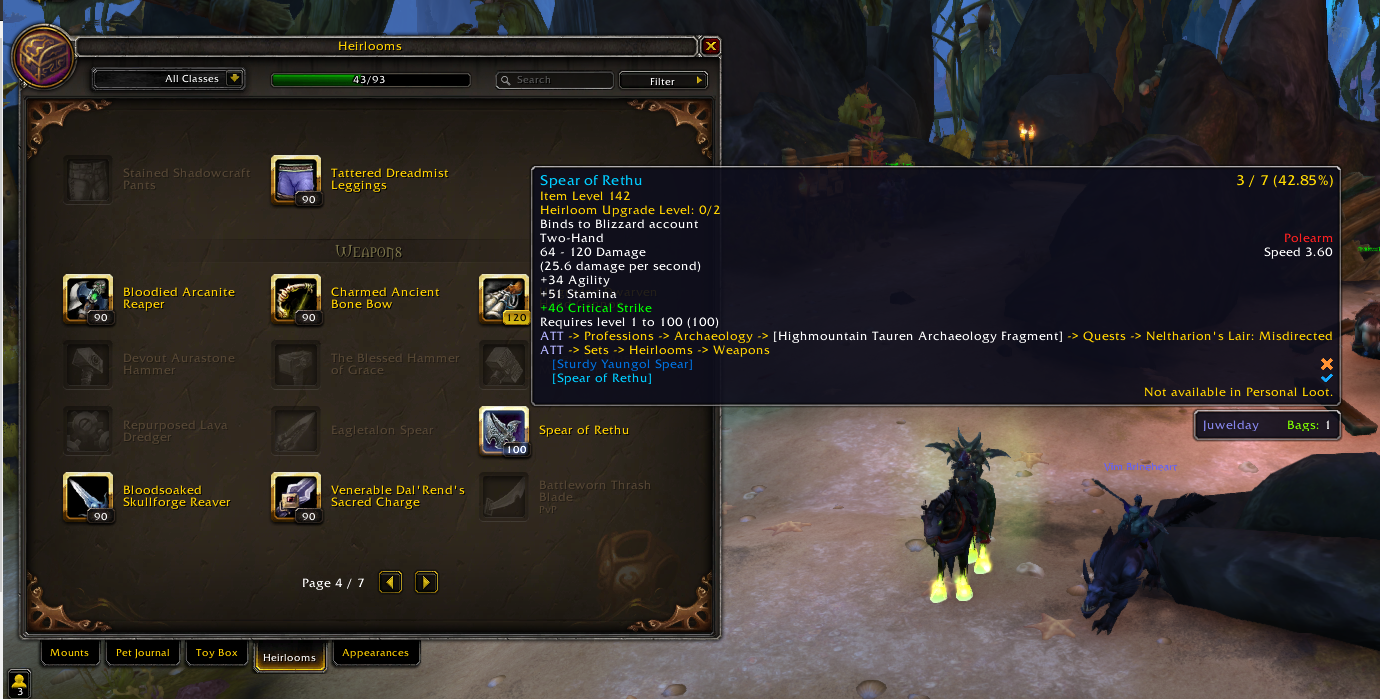 Legion Archeology (800) is taught by Dariness the Learned at the new Dalaran at the Broken Isle!

Battle for Azeroth Archaeology (950) is taught by Examiner Alerinda in Dazar'alor and by Jane Hudson in Boralus. The easiest way to find these NPCs is to walk up to a guard in Dazar'alor, or Boralus then ask where the Archaeology trainer is. Asking the guard will place a red marker on your map at the trainer's location.